January 17, 2011
We landed at Santiago airport at about 9:30 AM and made our way through customs and immigration checkpoints without too much trouble.  I found out that the US is one of the countries that Chile has a reciprocal agreement with, which meant to us that we each had to pay 140 USD to enter the country (but did not need a visitor visa).  The weather was beautiful.  It is rare to see thermometers in Chile because the weather is always the same:  sunny and warm, not too humid - Perfect.

Juan was waiting for us after we picked up our bags.  It was so nice to see him after such a long time.  We drove the 20 minutes or so from Santiago to the suburb where Juan lives with his family, Talegante.  There was a traditional Chilean breakfast and the open arms of Juan's parents, Juan Carlos and Veronica waiting for us. I knew the minute I met them that we were going to be great friends.  The make up of our families is similar.  Two older daughters and a younger son.  Breakfast consisted of bread, slices of cheese and meat, tomatoes (always tomatoes, with every meal), avocado, butter, jam, fresh apricot and peach juice (from trees in the yard - more on that later).

After breakfast, showers were in order after the nearly 24 hours of travel from Michigan to Santiago.  Hot water, another lesson learned quickly, is not always automatic.  So the first of several cold showers was had on day 1.  But it didn't really matter.  We were in Chile!

Their home is just beautiful.  Modest bedrooms, pleasant living areas on the inside.  It is the outside that amazed me.  3 season outdoor living with beautiful patio furniture, large outdoor table for dining and a gorgeous barbecue area where Juan Carlos prepared the first of many feasts for us on that first day.

The pool was next.  Will and Rachel jumped right in.  Monique and her family met us in Chile also; she is my 'sister' from Rio.  She was an exchange student at my parent's home twenty years ago and we have all stayed close.  She also knew Juan as she was visiting us in the states when Juan was on exchange at our home in 2008-2009.  It was nice to see her and Francisco, Monah and Mateo.  All of our South American friends together in one place!

We met Juan's sister, Josefina, a very sweet girl, 22 and attending a university in Santiago, and also Veronica's parents, Loly and Nino.  Lovely people.  So much kissing all around.

Lunch in Chile is the largest and most drawn out meal of the day.  Started with Pisco Sours, a traditional cocktail in Chile.  It tastes sort of like a whiskey sour cocktail from the states but it is made with pisco, a spirit made out of grapes.  I had never heard of this until that first day.  Very nice and refreshing.  There were also appetizers, some pickled eggplant with crackers. The main course was BBQ pork, Chilean salad (tomatoes, onion, cilantro, olive oil) and pebre (recipe to follow - this stuff is amazing on anything from bread to beef to pork to fish)...and of course, wine.  Chile has amazing wine; the best in the world to anyone you speak to in Chile - I say I need to agree.  We had a red for our first lunch.  I do not recall the type but know it went beautifully with our traditional Chilean meal.

We really don't speak Spanish.  I made sure to get a few phrases memorized, but for the most part we don't speak it or understand it.  Juan Carlos and Veronica had both taken classes in English in anticipation of our visit (how nice is that?) and they did just wonderfully.  Juan was going to have his work cut out for him as a translator for the next ten days.

After lunch it is time for siesta and unpacking our suitcases.  I felt at home already.  Will and Rachel and Ron swam again and then a few hours later, it was time for dinner.  Really?  More food?  We had wonderful home made pizzas with traditional toppings as well as palmitas (hearts of palm) and green beans.  Things commonly used in many dishes in Chile (and on pizza I guess).

More wine, more conversation (yes, conversation - it worked) then off to bed after our blissful first day in Chile.  Tomorrow, our tour of the neighborhoods of Santiago!

Mix all ingredients well in a blender and serve in well chilled glasses. 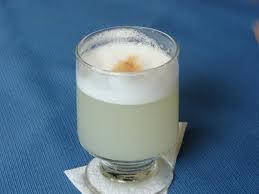 Finely chop the cilantro, parsley, scallions, and garlic. Mix in a small bowl and add the olive oil and lemon juice. Add the chopped chile, salt, and pepper to taste. Let marinate in refrigerator for at least one hour, preferably overnight .  Chancho en Piedra is a variation of pebre.  Make the Pebre as above, but add 1 large ripe tomato, peeled, seeded, and chopped. 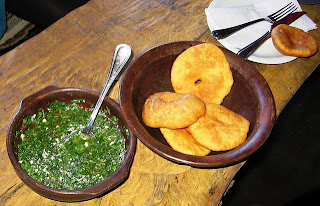 In a medium bowl, toss the onion with the vinegar and season with salt and pepper. Let the onion stand for 15 minutes, tossing a few times. 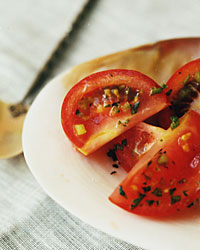