March 20, 2011
Last weekend, Ron kept reminiscing about his Mom's cooking.  He called his sister asking for Dolly's Easter sausage, cheesecake and her Miracle Whip cake recipes.  I recall wondering what was the obsession with that all of a sudden.  Come to find out, last Saturday, March 12th, was the 22nd anniversary of her death.  Dolly must have been trying to communicate with him ........and the best way to a son's heart is with a mother's cooking.

Tonight, Ron made his favorite cake ever, the chocolate Miracle Whip cake.  I had heard about it many times but we had never made it. It always sounded odd to me, Miracle Whip in a cake recipe?  I pictured something sour.  It is really quite good, actually, one of the moistest I ever tried.  The Miracle Whip adds the moisture and binding power from the oil and the eggs and the vinegar must do something.  I think this recipe came right from Kraft and on the side of a MW bottle from the 60's.

(I only had a bite as I am on a Foodie Diet - going well so far, my fellow Foodists) 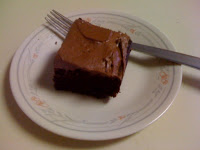