March 31, 2011
I worked at the Onigaming supper club in Houghton for nine years, from the age of 16 until grad school.  My grandparents were the managers there for 17 years; I was certainly very excited to be making such good tips at 16.  It is no longer open, unfortunately.  The 'Club' was a great place to work.  It was only open for dinner and only in the summer.  So I never had a chance to get sick of it.  It was situated right on the Portage canal on the way to Chassell.  Boats would come and dock and people would come for in drinks or dinner right from their boat.  It was originally a private yacht club when it opened in the 1930's.  The seating was mainly on the large screened in porch overlooking the canal.  A very pleasant place to be and a fun place to work.  I have a lot of fond memories about the Onigaming.

Lake Superior Trout, served on a wooden plank, was the specialty of the house.  I'll blog about that at a later time.  Another specialty, was of course, the spinach salad with warm bacon and sweet and sour dressing.  Delicious!  I made one last night for Ron using the sweet and sour dressing recipe my Grandma P wrote down for me on the recipe card shown below. The original salad was made from mature spinach, I used baby.  Also, the original used bacon and bacon fat kept warm on a burner in the kitchen.  To simplify, I used real bacon bits warmed up in the microwave. 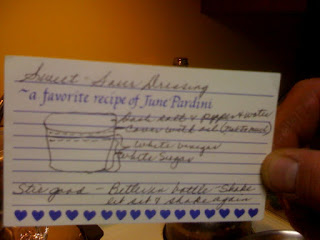 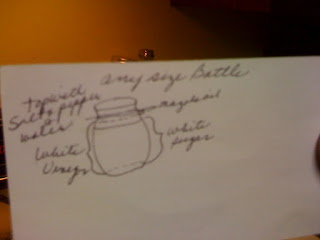